Five Little-Known Ways You Can Damage Your Windshield

As you might imagine, we see a lot of unusual damage in the auto glass business. Some of it can’t be avoided, but sometimes a vehicle owner can be their windshield’s worst enemy. Following are the top five completely avoidable reasons we’ve had to replace windshields. 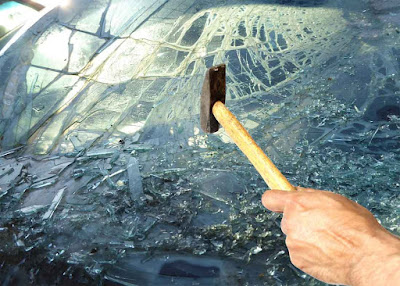 1.     Failing to repair small chips and cracks
Most small windshield cracks eventually turn into bigger cracks; it’s only a matter of time. They can be surprisingly easy to ignore, especially when they’re not in the driver’s line of vision. But left unrepaired, minor damage can become very expensive, very quickly. A dime-sized chip costs an average of $50 - $60 to repair, but once it spreads, the entire windshield may have to be replaced, costing $200 or more.

Most insurance companies cover the entire cost of a windshield repair, with no money out of pocket for you. Insurers come out ahead this way because so many cases of minor windshield damage eventually get worse and require windshield replacement, which costs everybody more.

2.     Hitting the Windshield to Remove Ice
Let’s start with what should be obvious, but isn’t to everyone: Don’t hit your windshield ice with a hammer. Yes, people really do this, and it never ends well. But it’s not just hammers that break windshields; the same rule applies to any tool, even a scraper. This is probably why they call them scrapers rather than war hammers. Auto glass is heroically strong, but sharp impacts—especially on a cold windshield—can easily start cracks forming.

Always use flat motions when you scrape, keeping constant contact between the blade and the glass. Don’t rush it. Avoid the animal impulse to smash your scraper against the unforgiving wall of ice. Sing to yourself. It goes faster if you sing.

3.     Pouring Hot Water on an Icy Windshield to Defrost It
Time for science class: When you pour hot water on thick, cold glass, the outside of the glass expands (grows slightly bigger). The inside of the glass is still very cold and does not expand as rapidly as the outside. The result is that the windshield tears itself apart from the inside … another senseless case of windshield suicide that could have been avoided.

Scraping is no fun; we all agree. But it’s less depressing than windshield suicide. And being careful when you scrape can save you a couple-hundred bucks.

4.     Aerosol Can Explosion
Yes, it gets this hot inside a vehicle in the heat of summer. If an aerosol can is sitting in the sun in an enclosed vehicle, the combination of ambient heat and radiant solar heat can raise its temperature to 150 degrees Fahrenheit, which means boom-time. And, yes, the explosion sometimes cracks or shatters auto glass (in addition to the monumental mess it makes inside a vehicle). The solution is simple: store your aerosol sunscreens and bug sprays in a shady part of the vehicle, away from the sun. Remove them altogether between summer trips.

5.     Failure to Replace Wiper Blades
Most of us replace our wiper blades when they stop clearing the rain away effectively—every six months or so. But if you let them get too worn, the metal clips holding the blades can abrade the surface of the glass. Once the metal touches the windshield, it begins scraping away microscopic amounts of glass with each pass. You may not even notice the damage at first. It’s usually most apparent when you’re looking into oncoming headlights or direct sunlight, which appear hazy and diffused, limiting visibility. This condition can usually be repaired with professional buffing techniques.

As the problem worsens, score lines become slightly visible on the glass. At this point, the etched areas may still be repairable by buffing, but if the grooves continue to deepen, the windshield may have to be replaced.

It’s easy to stay on top of wiper blade maintenance: put a note in your calendar to replace them every six months. If you already have windshield damage, call a professional auto glass repair shop to have it fixed.

A Little TLC Goes a Long Way
Your windshield doesn’t need a lot of tender, loving care, but some occasional maintenance, prompt repair of small cracks and chips, and a little common sense can keep it in fine shape for years to come.

This content was provided by The Glassman, mobile glass repair for Wichita, Kansas.

Posted by MobLantern at 1:00 PM